Dimensions lets you define hierarchical data structures which can be used in filters and reporting, both within Profitbase InVision, and in 3rd party tools such as Power BI.
Dimension can have any number of levels, and each level has an id, name, and optional translations for different languages.
Dimension can also have properties, which is a way to define “features” of dimension members (for example, weight, color, length, etc.).

Dimensions are always stored as wide tables in the database, but you can edit them as parent-child hierarchies in the dimension editor.

The example below shows the columns in a table for a two-level dimension (L1 and ProductID), having “ProductID” as Key Id, translations for English and Norwegian (EN and NO), and a Weight property. The table includes a SortIndex column that specifies how siblings are sorted (not shown in the example below).

How to create a dimension

If you want to enable the dimension to support different languages for displaying members, select one or more languages in the Languages dropdown. The language-specific names for each dimension member are managed in the Dimension Editor.

Specifying a dimension as a Primary Dimension means that it appears in the list of "primary dimensions" in the Dimension Editor without users first having to select a specific Solution.

That gives Power users a central repository of dimensions they can edit and publish to Work Process Versions or other solutions.

Think of primary dimensions as a central repository of dimensions that can be modified and published into production. 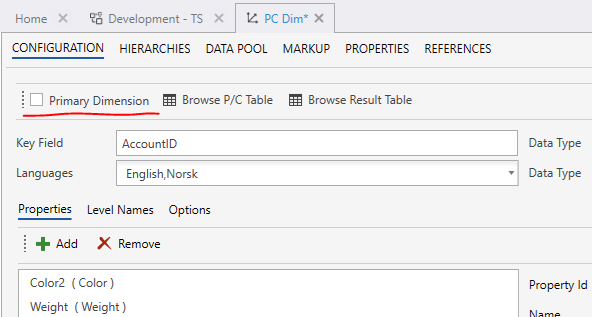 Dimension members can have zero or more properties. For example, products in a Product dimension can have properties such as weight, height, color, etc. Each property is materialized as a column in the dimension table.

This is the Id of the property field and the name of the column in the dimension table in the database.

Name specifies the label of the property in the Dimension Editor user interface. You can also provide specific translations for the label using this field.

Specifies the data type of the property.

Use this feature if you want users to select from a set of predefined values when setting the value of the property.

By default, column names for all levels except the leaf level are auto-generated using the format L[level number], for example, L1, L2. If you want to override the naming for each level column, you can specify this in the Level Names list.

If you need the dimension to always contain an empty member, enable the Include Empty Member option.

This option is typically used when you are using the dimension as a source for a dropdown in a spreadsheet, and users must be able to select a “null” or “not applicable” value.

To build the dimension and edit data, you need to use the Dimension Editor in a Workbook.

Adding members to a dimension using the tree editor

Adding members to a dimension by importing from clipboard/Excel

To import multiple members at the same time, click the Import button at the top of the dimension tree. This will display a table editor that lets you copy/paste data from Excel (or any other tab-delimited file).

Note that you need to use Ctrl-V to paste into the table. You cannot right-click a cell in the table editor.

To organize dimension members in a hierarchical structure, you can do the following:

You can edit properties and dimension member names (including translations) using Table Edit mode. That enables users to quickly edit data for multiple dimension members using data grid functionality like drag-copy of cells and copy/paste. While in Table Edit mode, you cannot edit the tree in any way, and you cannot switch back to the Properties tab until you have saved any changes.

Note When you are in Table Edit mode, you must remember to save your changes before choosing a different dimension member from the tree, or else all your changes are lost.

The changes you make in the Dimension Editor are not fully applied until you have published the changes. That means that you can edit the data and hierarchy, save it, and continue working until you are satisfied with the result. Before applying those changes to the actual data model used by Data Stores, Filters, Tables, etc.

Automating import of data to dimensions

You can import data to dimensions through Dataflows and staging tables. 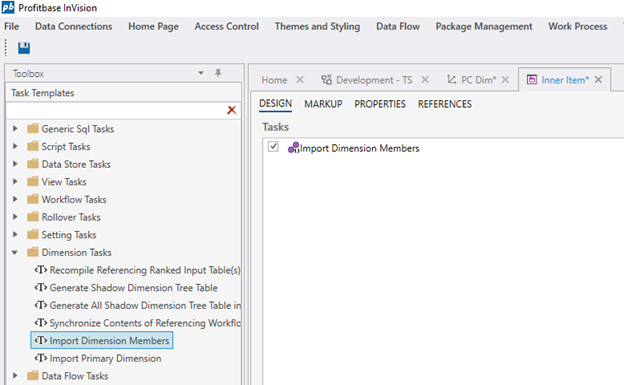 You can pull in a dimension definition (including data) from a different solution. You can do that by using dataflows. This means that you can automatically copy the data and configuration of a Primary Dimension into another Solution (usually a versioned Solution). 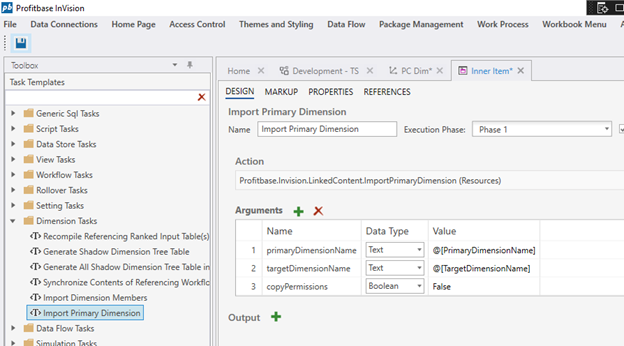